Writing the Outlook add-in described in my previous post was composed of the following steps:

Ah, the wonders of VSTO. Saving us all the unnecessary hassle of adding COM references, implementing interfaces and working too hard. After installing VSTO 2005 SE we can create a new Outlook 2007 Add-in project that creates both the add-in project and the MSI Setup project that can be used to install it. 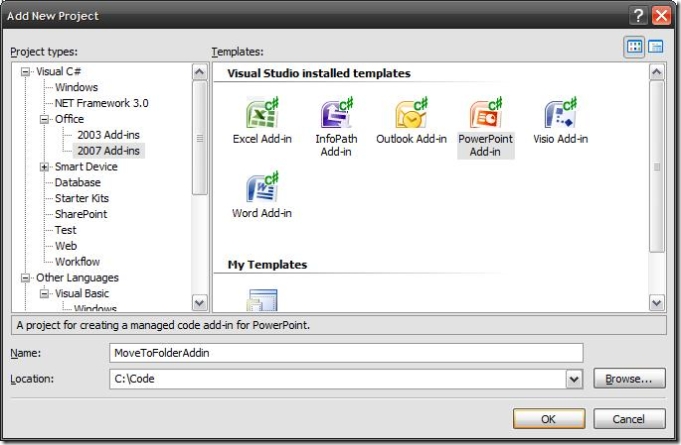 To add my own menu items to each item's Context Menu, I use the new ItemContextMenuDisplay event that is exposed by the Outlook 2007 object model. In the pre-supplied Startup method I simply add the following event registration:

In my event handler method I start by fetching the current Outlook folder:

and creating the root of the popup menu tree:

// Create a new button in the commandBar. The command bar itself is received as a parameter to the event
// handler  method.

Now I recursively go over the current folder and its subfolders, adding new buttons under the rootButton as I go along.

As we could see above, each leaf node's Click event is handled by the MoveToFolder method:

Well, maybe not. But this is the entire extent of the code needed to implement this add-in. I've attached the whole project (including the MSI project) so you can install it at home, or use the code as a base for whatever add-in you feel like writing. The pre-built MSI is in the MoveToFolderAddInSetupDebug folder. Enjoy!